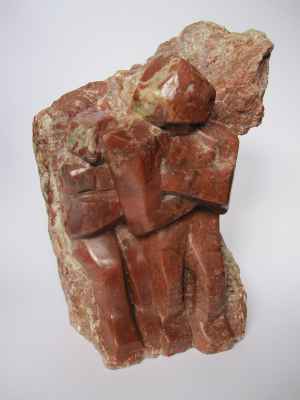 Carved out of red Indian soapstone, my idea about this was to carve an arrogant man trying to shake off his weak and fragile woman who is relentlessly and irritatingly clinging to him. My original title was “Giving the Cold Shoulder’ but I changed it to ‘Out of Eden’ because they are both as bad as each other. They are both colluding with each other by perpetuating this bad behaviour – she by thinking about herself that she is ineffectually subservient and he by behaving brutishly. Adam and Eve were once in the Garden of Eden without a care in the world but, by getting involved with the apple, they discovered that they had destroyed their lives together. I carved it in a stark way to resonate with the former brutal Soviet Communist style.